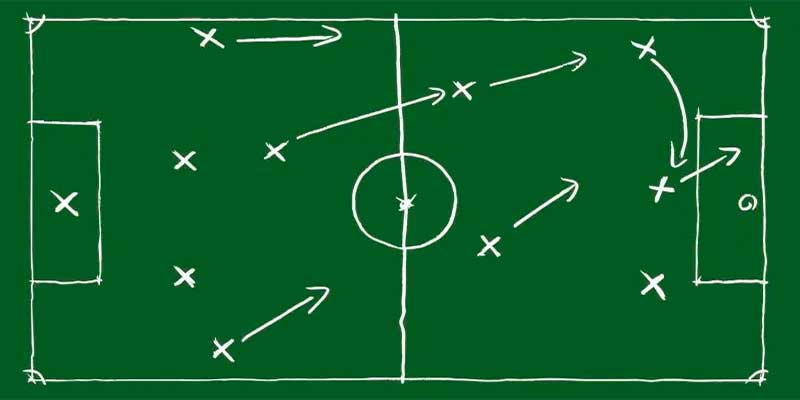 In general, the collective organisation of a team requires the establishment of a basic system and the definition of the principles of animation of this system.

Consequently, the organisation of attack or defence consists of efficiently ordering the attack and defence manoeuvres that are permitted by the system and the value of the players.

The choice of the set-up and animation is dictated either by qualitative considerations (player potential) or by the coach’s own concept of the game.

In general, the coach should try to clarify the tasks of each player, but in the end, the instructions are given only serve as a guide for better intervention or better positioning.

Offensive leadership is based on three main tactical principles:

Defensive organisation is based on three main tactical principles:

The organisation of the soccer game is the basis of the players’ development. It distributes the roles on the field to obtain an efficiency of the whole. It is obvious that a team cannot play without a collective organisation. Each player does his job in relation to the others. His tactical sense allows him to adapt to solve game situations in the interest of the team.

Intuitively, the team plays according to its strengths while protecting its weaknesses.

The coach in soccer seeks to know the qualities and weaknesses of his group in order to improve its weaknesses and to maintain and improve its strengths. The organisation of the game is permanent, whereas the game plan (tactics) is temporary and relative to a single match. For the player, it corresponds to a situation.

A well-constructed organisation is expected to:

In order to respond to these hypotheses, modern football has developed the notion of a team-block and associated this block with a system of organisation.

The integration of these notions by the players requires important tactical work during training.

The qualities of the players determine the form of organisation that allows them to express themselves in the best possible way. The rational occupation of the field determines the position, the placement on the field, and the position in play according to the tactical situation.

This adaptation is learned, educated, and improved through training and repetition of combinations.

Tactics are based on the principles of the game which allow players to react in a coordinated and homogeneous way.

The three-man defence with two full-backs in the middle is more difficult to use for average teams than the four-man defence.

In the middle, teams with only one defender are overwhelmed and do not find the balance. The speed of counter-attacks requires at least two players in this area. Teams no longer neglect the flanks, which become important in the attacking game.

There are many attacking formations, but many teams use a 4-4-2 with two players out wide.

Some teams use three strikers, but most often two strikers who play either next to each other or behind each other.

Having versatile players in the attacking positions is a considerable advantage, as it makes the game less predictable for the opponent.

The efficiency of a team is built on a stable basic organisation, understood and accepted by the players. Of course, an organisation is never fixed; it is adapted and modulated according to the matches by the players themselves.

In modern football, an improvisation is no longer an option; the players know their field of action and their role. This can be seen in the major competitions.

The most used systems are the 4-4-2 and 3-5-2 systems. But a coach must choose a system that is adapted to the ability of his players, so as to have a tight block with the centre of gravity below the central line.